1) Cooking is about innovation, baking is about precision: Which is why substituting honey for maple syrup in a cheesecake base will never work- but adding honey and cayenne pepper to scrambled eggs is genius.

2) Keep on running: Exercise is one of those things that- even if you aren’t naturally superhuman- you always feel you should take up. Mostly because of that insidious whisper that, once you pass the 17-25 ticky box, your metabolism will completely malfunction. Not to mention the fact that 75% of all business deals are apparently settled during corporate golf. So have a go…or just take up hula hooping:

3) Covet your socks: In J.K. Rowling’s Harry Potter and the Philosopher’s Stone, Dumbledore has a line which has always stuck in my head: ‘One can never have enough socks’. Now, my sock-wearing career has been somewhat rocky. I have been known to forage around my drawers and do laps around my house, all the while screaming the same question ‘where the @£&^ are my %@£^@ing socks’. My particular qualm is something I have come to refer to as the ‘hot date sock phenomenon’: in short, whenever I have a particularly sparkling social occasion to attend, whether this be a happening party or a first date, I seem to be totally devoid of socks that are not stripy, furry, knee-length, or all of the above. It is in light of such traumas that I recommend to you all that you covet your decent sock wear: roll them, fold them, put them under lock and key. Because one day you’ll look in your drawer, and there will be none left.

4) Cava is the ultimate party drink: I have been mocked for this (especially as I can be an alcohol snob at other times) but I maintain that cava is the surefire way to a great night out. To clarify, the cava that I drink is very, very cheap: around five quid a bottle. Despite this, it is just about bearable to drink without mixer, therefore making it the cheapest and most deceivingly flashy alcohol choice for a night out. Not bad. And being bubbly, it is reminiscent of those fabulous under 13 parties we all attended where the only thing to get wasted off of was Coca Cola (where we, remarkably, still managed to have a great time).

5) Pick friends that you can be yourself around: Nothing is worse than being a wannabe who thinks that life is just one big hierarchical high school in an American movie. If people make you feel insecure, or anxious, or whatever, then it doesn’t mean they’re bad people. But it certainly doesn’t mean you need to be friends with them. Equally, there’s no reason to bore someone with your time if you’re just going to be a spineless wreck…

6) Be honest about your interests: You can only hide a secret weakness for Queen for so long until you leave your iPod out on Shuffle. But, odds are, most of your housemates will be closet fans as well.

7) Eat: In my all-girls high school, there was a brief trend where we all channelled eating disorders. For me, this consisted of three months where all I consumed was sugar-free Hartley’s jelly and diet coke. But after parading our anaemia and well-defined ribcages, we all pretty much grew out of it. Ultimately, the least fun way to spend your life- even if you have managed to achieve the figure of a six year old- is to spend it musing on ways to not eat.

8) Do not associate with gentlemen who refer to you with any derivative of ‘baby’: This includes ‘babe’, ‘babes’, and ‘baby cakes’. Equally relevant in cases of ‘love’, ‘doll’ or ‘sweet cheeks’. Alternatively, I was once given the nickname ‘Stacks’ by a particularly charming courter. Upon enquiry, this was ‘because your cheeks look like you’re storing food in them’. Somewhat unbelievably, we stayed together for two more months.

9) Floss: I have never been germ-phobic. I’m happy to share drinks with my friends, my room at university always looks a little post-apocalyptic, and I have even been known to take the London Underground. However, I do love a good floss; personally I’m a waxed, ribbon floss kinda gal, but whatever works. In the same way that some religions proselytise (Judaism has never been big on it), I take it upon myself to promote the benefits of flossing. It is the only real way to achieve dental hygiene; it is cheap; it is easy; it is also a cracking way to spend a Saturday night.

10) Whatever you do, don’t say it in kisses: If you do use ‘x’s’ in your text messages, try not to attach any significance to the amount of them you put. Nothing says ‘bathos’ like an angry message followed by a passive aggressive lack of x’s. Which leads into my next point…

11) It is a Facebook status, not an epitaph: Do not attempt to write anything deep and meaningful in your Facebook status. There are various reasons for this. Firstly, as a Facebook status, it is by nature a trivial medium. There is therefore no way of not looking like a melodramatic twat. Secondly, as well as being a trivial medium it is a very public medium. So if you publicise the sentiment that ‘Dave is such a playa and he really wasn’t that great anyway’ then, odds are, you will want to relent somewhat when Dave turns up with roses and that girl you saw him with transpires to be his sister. Alternatively, if you choose not to publicly shame poor Dave, your enigmatic proclamation that you ‘can’t take this shit’ may not be the best method to express your feelings to him, however, it may inadvertently offend the friend you recently argued with, or great aunt Judy who you just had scones with.

12) Play the devil’s advocate: This is something I learnt from my mother, and at times it’s difficult to maintain. However, playing the devil’s advocate (i.e., taking a position in an argument that you do not necessarily degree with, for the sake of debate) is the only way to look at a situation fairly. The most practical application of this is during an argument. The more impassioned of us, myself included, are wont to turn into a small irate terrier when someone has really %@£$ed us off. But taking twenty minutes to consider their side of it, before you send a badly-worded text message that you’ll regret, is always a good idea.

13) SMILE– thanks to a misjudgement on what makes a good photo, I look like I was taking crack cocaine throughout most of my teens. Many of my peers were more successful, working a series of pouts and poses that wouldn’t have looked out of place on a page 3 model. But either way, it is regrettable to look back on a series of photos from your GCSE results night which looks more like a celebrity funeral.

14) Value your old friends: These are the people that first saw you collapse after one too many WKDs. They are also the people who will sell such anecdotes to the tabloids, if you ever manage to pull a member of the royal family. Keep in touch.

Simon: What you doing?

Neil: I’m reading, I don’t know why anyone bothers with this s**t, its like a slow version of T.V

In this exchange, Neil from The Inbetweeners exemplifies why literally no one has read a book since 2005. Okay, this is not strictly true. But reading has declined to the point where 1 in 4 adults have given up reading for pleasure. Increasingly, we are relying upon movie directors to show us their creative vision, whilst our imaginations rot away like a forgotten Cox apple core in a desk drawer. The reality is, no special effects will ever match the way you envisioned Voldemort back in the day, and everyone could benefit from a bit of slow T.V.

16) You can’t love someone unconditionally: Most people associate a broken heart with their first break-up: loneliness, betrayal and disappointment. But, for me, this was nothing compared to when Britney -who, head-shaving and whirlwind marriage aside, could do no wrong in my eyes- released Scream and Shout, the worst contribution to modern music since someone brought their singing poodle on Britain’s Got Talent. Sometimes you just have to let go.

17) Be a film snob: Watching a bad film is like eating junk food: unsatisfying, bad for your health, and infinitely regrettable. The difference between junk food and watching a bad film is that the latter takes away two hours of your life, as well as your waistline. Think before you press PLAY. If only I had thought twice before watching Paris Hilton’s The Hottie And The Nottie, the critical and financial disaster film which was voted third on IMDB’s bottom 100 movies: http://www.imdb.com/chart/bottom?ref_=sr_1.

18) Don’t wear a floaty silk skirt on a windy day: Or in other words, don’t wear a glorified parachute around your waist. You are not Marilyn Monroe. 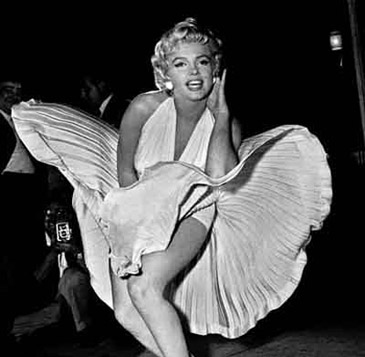 19) Sexual innuendo is always funny: And has been since the Middle Ages.

20) If They’re Just Not That Into You…get over it: Everyone has been guilty of flogging a dead horse (can I still use that idiom?) when it comes to unrequited love. Odds are, it’s probably because you’re following them around like a puppy dog…

21) Give everything and everyone a chance: If you hate it, it will make a great anecdote. If you hate them, there are always restraining orders. But in all seriousness there is no need to close yourself off from novel opportunities. In some sense, it’s the only way to grow as a person. My favourite illustration of this is Howard in Fresh Meat, who aims to compile a definitive list of things that are ‘Good/Bad’, along the lines of ‘Fudge- Good…Denim-Good…Roller-blading- Bad’. Whilst I don’t recommend this particular brand of endearing psychosis, it’s a good start.