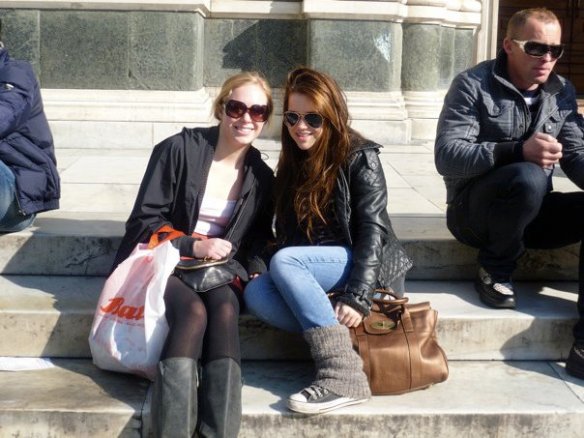 What did I do on my gap year? I must have had this conversation at least a hundred times. To be completely honest, I am jaded of even talking about it. To give someone a 20 second account consisting of key words and cliches is not just insufficient; it is positively dull and simplistic. Unless I come out with something like this:

Me: Oh you know, nothing much, just lived in Italy for a while, became fluent in the language and had an illicit affair with Berlusconi. That is before I rented a llama and we rollerbladed together across Cambodia.

And this account is only partially true, as anyone who knows about my weakness for diminutive Italian men will know.

My year out was not, by any stretch of the imagination, the happiest year of my life. Nor was it the most hedonistic, the most successful, or the most romantic. But it was the year that changed me the most, and the one that profoundly influenced my life. So here it is. My Gap Year: Part One. The long version.

Sorry, I Can’t Take Your Order

After some shameless flirting with a bartender at the local gastropub, I somehow managed to secure myself a waitressing job there- all the while glossing over the fact I had absolutely no experience. Initially, this seemed like an ideal job: conveniently close to where I lived, decent pay, and no obligation to say ‘Hey, what’s up? Welcome to the pier’ or, still worse, ‘I’m lovin’ it!’.

The honeymoon period ended prematurely when I met my new boss, Satan. For a number of reasons, Satan— a fire breathing dragoness whose customer service inversely correlated with her behind the scenes swearing and plate-smashing— and I, did not get on, leading to an ignominious end to my waitressing career after a couple of months. In the words of Edith Piaf, je ne regrette rien (and I particularly do not regret leaving that job).

Theatre On The Fringe

When the waitressing career didn’t work out, I began an internship at the Old Red Lion Theatre. This was my first experience of ‘Fringe’ theatre: a term for London theatre which is outside the popular West End district. Predominantly, professional actors perform in fringe theatre at the start of their careers, in that uncertain time before someone throws a chance to play Hamlet their way.

If Carlsberg made internships, this would probably have been it. I got to read through scripts; meet comedians; read in for professional actors; and every so often I was sent out to source cigarillos, or something equally obscure. Sure, there was mind-numbing administrational work- I don’t even want to think about how many thousands of ticket sales I processed- but, after many months out of education, it was actually quite pleasant to remind myself that my brain still worked. My favourite part of the experience was helping out at the rehearsals for a play adaptation of Evelyn Waugh’s ‘Decline and Fall’. I suspect that rehearsals at a West End theatre, where interns are wedged between the competing egos of an megalomaniac director and an award-winning RADA-trained superstar, might not be so pleasant. But my experience was nothing like this: the atmosphere was relaxed and unpretentious. Although all the actors were at different points in their careers, ranging from those who were just starting out to ex-Doctor Who star Sylvester McCoy (the most eccentric man I have ever met), this never let to any sense of hierarchy or unpleasant rivalries.

Both Red Lion theatres also happen to be based in Angel, Islington; now, one of my favourite areas of London. What was particularly fantastic was the proximity to the glorious Camden Passage, which is like a yellow brick road for hipsters: full of kitsch little cafes, an antiques market, vintage shops, a Japanese art gallery and one of the gorgeous Breakfast Club diners (http://www.thebreakfastclubcafes.com/brunch).

The best thing I learnt from working there is that, no matter how unpredictable and ill-paid a creative career can be, it is almost always worth it. Of course, ask me to repeat that when I’m a struggling writer with an unpaid gas bill, and I will set my malnourished cat on you.

From Florence With Love 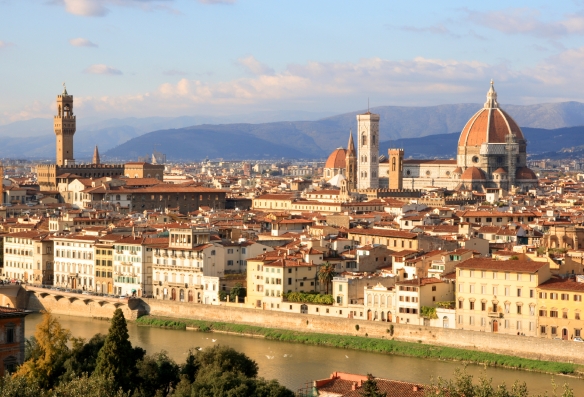 It is impossible not to fall in love with the city of Florence. Doing so is almost a cliché in itself; and I certainly bowed to cliché during my time there. I studied Italian at the British Institute, later taking up History of Art after drunkenly stumbled past the sculpture of Cellini’s Perseus. I took long walks along the river at night, something I would never feel safe doing in London. I became absolutely infatuated with the pretentious English public school boys studying at La Bottega dell’Arciboldo, an art academy. I took advantage of the ‘learning for learning’s sake’ culture at the Harold Acton library, which caters for the educated Anglo-Florentinian circle of ex-pats. Channelling Julia Roberts in ‘Eat Pray Love’, I threw caution to the wind and put on a good two stone from gelato and the world’s most delicious and monstrously calorific meal: gnocchi with gorgonzola sauce.

I learnt that, whilst Italian men were, on average, not as beautiful as myth may suggest, they were certainly as persistent. In the streets, any women under the age of 65 (and this was by no means a rigid cut off point) would be cat-called- ‘ciao bella’. I was flattered beyond belief when the bartender, Gianni, would send drinks over to our table, up until I realised he was essentially pursuing every English girl in the room. Not to mention the amount of creative souls there seemed to be; whilst an English lad on the pull might pretend to be a Premier League footballer or a 2009 runner up of X Factor, the Italian Lotharios claimed to be ‘artists’ or ‘poets’.

So, yes, I was living the cliché and relishing it in the way that any sentimentally-inclined 19 year old would do. But there was also so much that I did not anticipate. I will not claim that every moment was brilliant. I was homesick. I was fresh out of a painful breakup and living in the romantic capital of the world*, which effectively turned me into the Anti-Romance Snail. I was also hopelessly incompetent at the Italian language. But something about throwing yourself into unusual situations makes you grow as a person; I gradually learnt to conquer the unknown, walking around the Uffizi gallery with no prior knowledge of Renaissance art, or attending Roman Catholic Mass with Italian octogenarians.

Meanwhile, the nightlife was not what I expected; the main ‘club’ in central Florence, described even now as ‘one of the most happening nightspots’, is the dubiously named Blob. Blob, as I knew it, was the size of a public toilet, and smelt not dissimilar. There was a general disregard for the fact that Italy banned indoor smoking in 2005. The drinks were served by a greasy tattooed bloke who looked like a throwback from Harley’s Angels. And if you drank enough of these drinks, and stuck around long enough, you would be privileged enough to catch a glimpse of the patriarch. When I say glimpse, I mean a close confrontation with sweat and hair grease; and when I say patriarch, I mean the owner of the club—the ironically-named ‘Silver Fox’– whose blatant seniority to everyone else made him seem not sharp and debonair, as I might have imagined, but instead lecherous and past-it.

In stark contrast to this den of iniquity were the aperitivo bars dotted around the city. To clarify, aperitivo is an Italian conception: you go to the bar, you buy a cocktail for around 7€, and this qualifies you to take unlimited snacks all night from the buffet bar. It’s very popular amongst tired Florentinians after their 9 to 5’s, and an absolute winner amongst British and American tourists. Incidentally, the concept tried to take off in London last year…sadly, as Brits cannot help but confuse ‘nibbles’ with ‘ALL YOU CAN EAT’ restaurants, the enterprise went bust fairly rapidly. 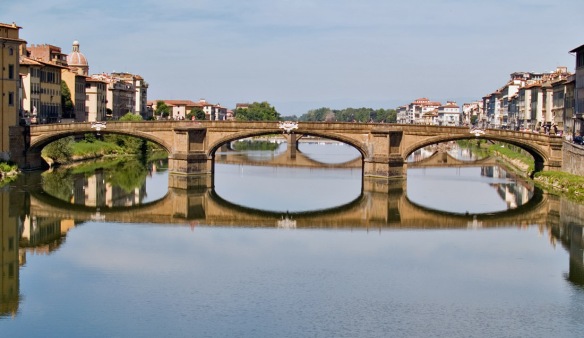 My absolute favourite place in Florence, however, is the stone ledge on the side of the Santa Trinita bridge. It was strictly illegal to sit there, of course, and there was some sort of large threatening sign warning of what would happen if you were caught. My Italian, thankfully, was never of an aptitude where I could fully decipher what the punishment was. You could stay for hours on a sunny day and fall into an almost stupefied state watching the reflections of the buildings in the River Arno. It offers the same feeling of serenity as an enclosed garden in a bustling area of London; a privileged vantage point to sit and watch, ‘within and without’, without being jostled along with the crowd.

This summer I’m going back to Florence, at long last. And I have the same feeling as many people might have about reuniting with an old flame. I’ve put it on a pedestal, idealised the culture and forever imagined what it would be like to go back; but somehow I know, that second time around, it will not disappoint.

*the people who think that Paris is the romantic capital are missing a trick.

Next: Vietnam, working at the BBC and the Edinburgh Fringe Festival.